A woman in western P.E.I. says she’s facing financial ruin as a result of renting out her house. 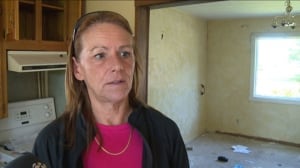 Lee Cowan surveys the damage done in the kitchen and dining room in her O’Leary home. (CBC)

She said the basement of the house was flooded, drywall is torn off walls, and cabinets and appliances are ruined. The damage has been reported to police.

Cowan said insurance won’t cover all the damage, but since posting photos on Facebook she has been overwhelmed by support.

“I have gotten thousands of responses,” she said.

“To say thank you to these people is not a big enough word. I can’t think of a big enough word to say how many people have said, ‘We care. We don’t know you but we care.’ They’re offering me all this support. They’re kind, caring people. Maybe they’ll help change the system a bit, so this doesn’t happen to somebody else.”

Insurance adjustors are still tallying the cost of repairing damage to the home. Cowan is looking for legal advice on what to do next.

Posted in Uncategorized | Comments Off on oct 1 trashed